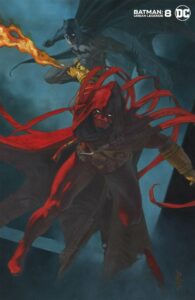 Batman: Urban Legends
Issue No. 8 – October 2021
Dark Knight of the Soul – Part 1
Azrael, the last acolyte of the Order of St. Dumas, has returned to the streets of Gotham City after serving with the Justice League in the stars. He’s convinced he’s strayed too far from his purpose, too far from his teachings, and needs to reassert himself. But he’ll be met with a city that’s changed forever, a city that will shake his faith.

Batman: Urban Legends
Issue No. 9 – November 2021
Dark Knight of the Soul – Part 2
Dead criminals are walking the streets of Gotham City, and Azrael’s faith is shaken. Is the rapture truly upon us, and will this avenging angel be called home? Or is there a more sinister and human force at work, and what warrior has been stalking Jean-Paul Valley without him noticing? Threats to Azrael’s body and soul are here, and he’ll need more than a flaming sword to stop them. 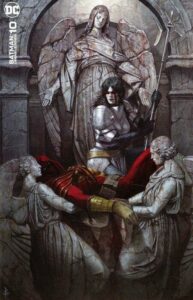 Batman: Urban Legends
Issue No. 10 – December 2021
Dark Knight of the Soul – Part 3
In his return to Gotham City, Jean-Paul Valley faces off for a final time with the new villain Poor Fellow, who has a lot more to tell Jean-Paul about the legacy of Azrael than he ever knew.