Issue #1 – January 1995
Requiem – This first issue acts somewhat as a disjointed prelude to the first issue of the series. As far as reading order goes however, though it acts as a prelude story to Sword of Azrael, giving background on Jean Paul’s father Ludovac, the Azrael before him, it would act better as a marker after issue 8 of the series as it ends with Jean Paul reflecting in the desert in his Azrael suit which he does not receive from Batman until the second issue of his series. Aside from all of these holes, this story also gives some insight as to why Jean Paul begins to have memory issues as his father did due to constant missions for the Order of St Dumas as Azrael and hallucinations from St Dumas himself that taunt him, mirroring those Jean Paul had during his time as Batman. The story also shows Ludovac’s interaction with brother Rollo, sister Lilhy, and the search for Carlton Lehah that would result in his death and the passing of the mantle of Azrael to Jean Paul. 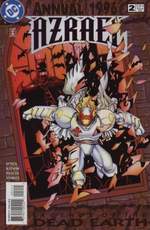 Issue #2 – January 1996
Legends of the Dead Earth
Knight’s Fall – This annual is a continuation of ‘Legends of the Dead Earth’ series which sees its main character in a strange time and future. Characters, and stories, are warped into an odd way and in this case the Order of St Dumas and it’s characters are in a mid-evil type of setting. Azrael and Rollo leave the ice palace en route to the hell that is Gotham so that Azrael may defeat the ‘Bat King.’ In this adventure he comes across incarnations of Two-Face, the Joker, and Bane before becoming on with the ‘Bat King,’ returning home and melting down the ice palace. 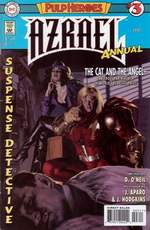 Issue #3 – January 1997
Pulp Heroes
The Vampire Bat – This annual is a continuation of a ‘Pulp Heroes’ 1930’s themed detective style issue that sees Jean Paul  in a three part serial (in one double-sized issue). Inspired by detective serials jean Paul speaks throughout the entire issue as if he is in an old detective serial which gets very old very fast. Traveling to San Francisco, he teams up with Catwoman to retrieve a black crystal bat statue with a diamond center.