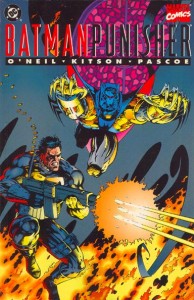 Batman/Punisher
January 1994
Lake of Fire
In this DC and Marvel comics crossover issue Jean Paul Valley as Batman meets Marvel’s Punisher. The Punisher follows leads to Gotham where his enemy Jigsaw has come to inject a rocket fuel into the city’s water supply system in hopes of ransoming the city. Batman and the Punisher briefly team-up when they realize that they are after the same people but Batman is betrayed by the Punisher twice who fears being taken in. In the end the Punisher escapes, Jean Paul feels he has failed and we are surprised to find that the Joker was actually the one behind bringing Jigsaw to Gotham. 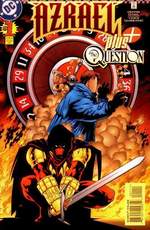 Azrael + the Question
December 1996
The Answer to the Terror & the Question
After saving a politician from being killed, Victor Sage is offered a job to protect the life of his daughter aboard a cruise ship she performs on. After lucid dreams of his father verbally abusing him, Jean Paul finds himself aboard the same cruise and helps save the lives of the passengers after a gang of would-be thugs attempt to kill everyone on board. 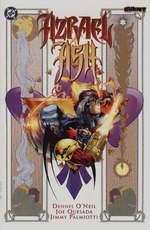 Azrael/Ash
January 1997
A mysterious fire is set in New York with reports stating a character with flaming swords was the cause leads Batman to confront Jean Paul on his whereabouts. To clear his name Azrael hits the big apple and encounters Firefly where he teams up with Ash.  With Oracle’s help, the duo locate Professor Kissedy, a former University teacher who has been using an alien to start fires in seeking revenge on those who wrote him off. In the end the alien sees the trust and is reunited with his mother.
This issue is special due to the fact that it features two characters created by Joe Quesada – Azrael and Ash. 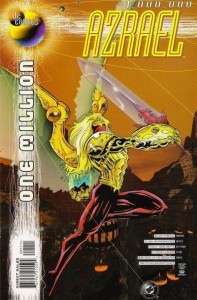 1,000,000
November 1998
Angel Wings – As part of a series of on-shot issues for the ‘one million’ title, we find a version of Azrael in the year ::insert year here:: getting his wings from Sister Dumas that enable him to time travel to any place and any time. During his travels looking to help he encounters versions of Green Arrow, Catwoman and Robin, and the Hawkmen. In going to the past he becomes discordant material, or an actual angel and witnesses jean Paul Valley as Azrael in hand to hand combat with Two-Face. Azrael is then taught a lesson by Sister Dumas about where evil comes from.