Curse of the White Knight 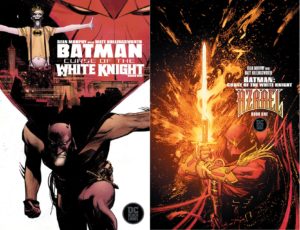 Issue No. 1 – September 2019
In this explosive sequel to the critically acclaimed blockbuster BATMAN: WHITE KNIGHT from writer/artist Sean Murphy, The Joker recruits Azrael to help him expose a shocking secret from the Wayne family’s legacy—and to run Gotham City into the ground! As Batman rushes to protect the city and his loved ones from danger, the mystery of his ancestry unravels, dealing a devastating blow to the Dark Knight. Exciting new villains and unexpected allies will clash in this unforgettable chapter of the White Knight saga—and the truth about the blood they shed will shake Gotham to its core!

Issue No. 2 – October 2019
The Joker’s plan is in full swing—with a single devastating secret and his puppet strings controlling the elites, the Clown Prince and his new recruit, Azrael, are ready to eliminate Batman and obliterate the Wayne family’s legacy. After meeting Wayne threatening to expose the identities of the batfamily, Ruth turns to Azrael and agrees to work with her and the elites to regain his birthright.
With Gotham City’s identity and institutions hanging in the balance, Gordon makes a surprising public announcement— that he is running for Mayor! The Joker’s public response however, that Gordon’s daughter Barbara is Batgirl however sends the Bat-family and the GTO spiraling. 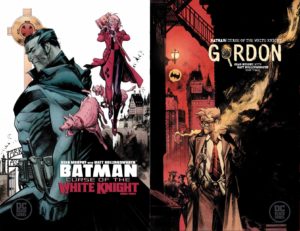 Issue No. 3 – November 2019
Batman salvages a groundbreaking clue from the wreckage of Wayne Manor and recruits Harley Quinn to confront The Joker for answers about the mystery of Gotham City’s foundations! Joker only gives more hints as to his final joke that he is about to unleash on Batman. Batman and Harley’s investigation takes a dire turn in the darkest corners of Arkham as Harley goes into labor! Gordon’s life is in peril when he steps toe to toe with Azrael after promoting Renee Montoya as the new commissioner. 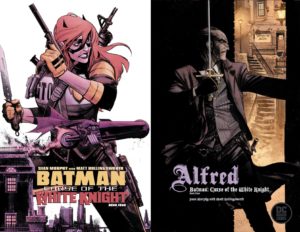 Issue No. 4 – December 2019
After a shocking tragedy strikes the Bat-Family and Montoya takes the reins, Barbara defies the GTO and goes rogue in the hunt for Azrael. When her new methods prove almost too effective, Batman intervenes-leaving Harley with Dr. Leslie Tompkins to recover from child birth. Given more information from Leslie, Bruce gets more of a backstory on the origins of Alfred’s gift and how it ties to JPV. Distraught over the death of her father, Barbara and Bullock go after Azrael only to be taken down and have her back broken by Azrael in combat. 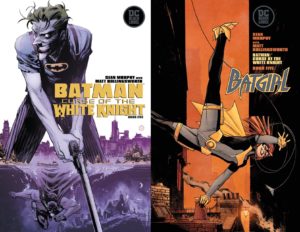 Issue No. 5 – February 2020
The GTO struggles to forgive Batman for his behavior on the tails of tragedy, but a promising path forward comes into focus when he uncovers a monumental clue about the mystery of Gotham’s ancestral curse. It may prove too little too late, as Azrael breaks free of Ruth’s mandate and unleashes a radical new reign of terror over the city and its competing super-criminals. Thinking she can be rid of Azrael, Ruth pits Bane against Azrael, only to see him beheaded and have to beg for her life. Harley meets with Joker and is able to coax Jack out to reveal a secret that could destroy Batman. Afterwards JPV dons his new batsuit and kills Penguin, Two-Face, Killer Croc, Poison Ivy, Baby Doll, Scarface and the Ventriloquist and many others en route to break out Joker. 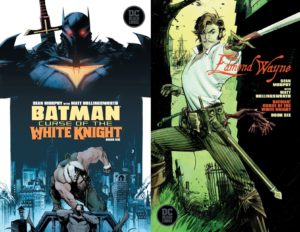 Issue No. 6 – March 2020
Gotham City’s crushing curse is uncovered! Everything Batman thought he knew about the Wayne family secret is turned upside down as Azrael and The Joker usher anarchy into Arkham. More of Jean Paul’s military background is revealed as a ‘Blood Angel,’ further his pre-war background by Jason Blood, last of the Order of St Dumas. Batman, Harley, and the GTO head to Arkham to get Harley’s kids back from Joker and fall into Azrael’s trap. After a final word with Jack, Harley faces an impossible choice as Joker struggles between his Jack personality and is ultimately shot in the head by Harley. 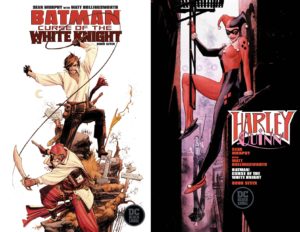 Issue No. 7 – April 2020
Bruce Wayne and Batman have come undone. Powerless after learning the truth behind his family’s name and legacy, Bruce prepares to shed all of his secrets and make one final appeal to the people of Gotham. As Azrael takes control of the city, Batman publicly announces that Bruce Wayne is Batman, pleading for everyone to stay inside as he hunts down the vigilante. 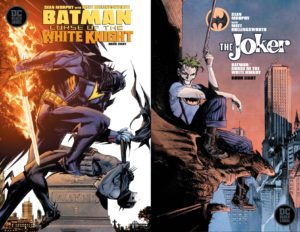 Issue No. 8 – May 2020
Witness the final battle of the two Bats in this conclusion to the second installment of the White Knight saga! After learning the truth about his name and fortune, Bruce Wayne has made a shocking public announcement in pursuit of redemption-but before he can secure Gotham’s future and prosperity once and for all, he must protect the city in one last brutal showdown with Azrael. With Batman devastated by his shattered identity and with little left to lose, there may be nothing left to stop him from abandoning his code and resorting to one unthinkable desperate measure. Batman goes up against Azrael head to head in an epic battle before learning more about his family background and cutting JPV’s throat. Bruce gives himself up to the police and is brought to prison where he asks for his personal guard to be none other than Jason Todd!