Below is sort of a crash course in Jean Paul Valley as Azrael. Instead of doing a separate bio/about for the original, and the current version, I decided to write about both in a sort of compare/contrast way, discussing their similarities and differences. Be warned it can get confusing!

The new/current iteration of Jean Paul Valley as Azrael was brought into the New 52/Rebirth continuity by writer James Tynion IV and Scott Snyder due to Tynion’s love of the late 90’s Batfamily. 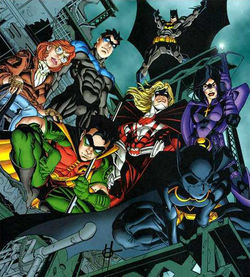 Tynion reintroduced Azrael during the 26-issue limited story run, Batman and Robin Eternal. This series arc went into back stories and reintroduced Jean Paul Valley as Azrael, a product of a partnership created by Mother for The Order of St. Dumas as their secret weapon; an ‘Angel of Death,’ who is dubbed ‘Project Azrael.’ There were major differences between this Azrael and the original version created by the characters original creators, Dennis O’Neil and Joe Quesada.

This new Azrael by Tynion was not a ‘test tube baby,’ like the original New Earth version, but instead was actually taken from his family at an early age after made to witness his own parents deaths. 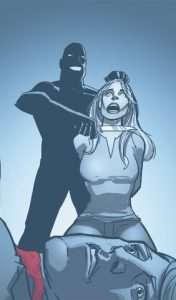 Going by the thought that tragedy created the will from inside, such as that with Bruce Wayne, this theory was proved to generally carry true in many of the persons who would be manipulated by Mother. From there, Jean Paul was brainwashed and reprogrammed by Mother of his prior familial bonds and placed with The Order of St. Dumas on Santa Prisca.

Placing the Order of St. Dumas on the island of Santa Prisca is most likely a nod to Bane as both the original New Earth and New 52/Rebirth version was born and bred at the prison which held its base there. The original New Earth version of the Order of St. Dumas however was based in the coldest region of Switzerland, not the tropics, with the Order being incredibly secretive and somewhat along the lines of the Illuminati. This Prime earth version of the order however was known somewhat as a worldwide conglomerate with its hands in technology and business affairs. Additionally, the New Earth Azrael and Bane are two characters who are generally synonymous with each other as they were both created for the sole purpose of inclusion for a single game changing extended story arc.

The original New Earth version of Azrael was of a long line of subjects who had taken the mantle of Azrael once its predecessor/father, had failed fatally in combat.

Men who were to become Azrael were subliminally trained from birth with the knowledge of ‘The System,’ which would give the person the means to be a skilled expert combatant and assassin for The Order of St Dumas should their bidding need to be done. As for the physical prowess, once able to be incubated, the subjects would be put into a tube and fed with specific animal proteins and hourly electro shock therapy to create the ‘rage’ that would drive an Azrael in battle.

Though the New Earth version of Azrael was from the Order of St. Dumas, which was very often referred to as a religious sect, it was never truly reflected. However, throughout the first quarter of Azrael’s solo series there were indications that he was learning more about the Order’s background from both Sister Lilhy and, when appeared, the dwarfling trainer Nomoz. That however changed with the New Earth version which was more along the lines of the Order being a faith that its followers believed and worshiped that could perform miracles. This was demonstrated once showing a mute given the ability to speak.

Bringing the character more into this century, his suit was more of a living entity with A.I. that fed the wearer, Jean Paul, information. 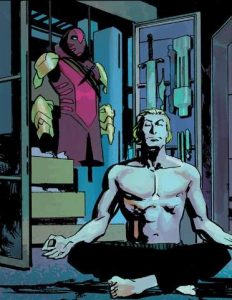 The new suit, dubbed ‘The Suit of Sorrows,’ is actually the name of the suit worn by the Michael Lane iteration of the character introduced by Fabian Nicieza in 2009 during the ‘Battle for the Cowl’ story line. The New Earth versions of Azrael wore a suit which had remained unchanged until Nomoz, an acolyte of the Order who acts almost as a welcome host when a 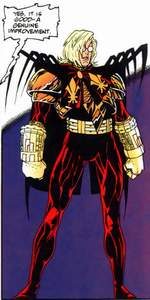 new Azrael is awakened, creates a new armor for Jean Paul to combat in current times in the second issue of Sword of Azrael. This time, the suit is able to withstand most types of bullets, and is fireproof. Also, due to Jean Paul’s constant loss of the sword as a weapon, gauntlets fed by flames in the gloves replaced the weapon.

Lane was not of the Order of St. Dumas, but the Order of Purity; a fact that is often mistaken due to his inclusion in the Arkham video games, and the suit was pieced together by previous templar warrior’s armors that fell during the Crusades. This suit was also considered to be cursed and drove the wearer mad with guilt over previous deaths from combat.

Both the New and Prime Earth versions of Jean Paul are highly intelligent individuals. Though the Prime Earth Jean Paul is mainly fed his information through his suits programmed A.I., the New Earth Jean Paul was a Graduate student of Computer Science from Gotham University. Jean Paul’s background in understanding of algorithms, engineering and even A.I., sans growing Detective skills, put him in the same league as Oracle as far as digital intelligence is concerned.

Not long after becoming Azrael, Jean Paul would be taken under the wing of Bruce Wayne to ensure that his training could be properly focused. Wayne knew that the young hero could potentially be a major threat from his previous encounter. 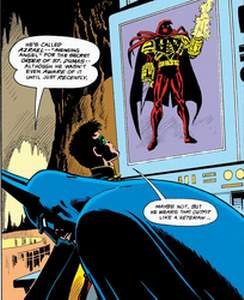 Jean Paul would work for Wayne Industries by day and train by night. However, due to an encounter with Bane leaving Bruce unable to continue as Batman, the cape and cowl were passed onto Jean Paul. Eventually Jean Paul would redesign the bat suit, fusing it with some of the artifacts of his Azrael suit, the most noticeable being the upper body armor. Eventually Bruce would take back the mantle of the bat once more after ‘The System,’ would start to manipulate Jean Paul’s mind and drive him to do things, most notably kill, that the Batman would not do.

The Prime Earth version of Jean Paul Valley seemingly did not take over as Batman as evidenced by the reaction to the ‘KnightsEnd’ style suit that he dons in the Detective Comics story arc, ‘Intelligence.’ 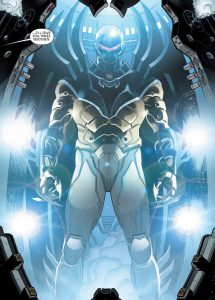 However, in Batman and Robin Eternal it is somewhat alluded that Jean Paul did take over after Bruce fell at the hands of Bane. This is one of Tynion’s mistakes that often gets overlooked. Most likely the writers were not sure if they were, and if so, which parts of the New Earth history would be ret-conned into the current Prime earth.

Tynion may have been a fan of the ‘No Man’s Land’ era of the batfamily, but did not do his research on Azrael as much of the information he used was more of an amalgamation of back story for the Michael Lane Azrael character that was created by Rocksteady games for the popular Arkham video game series. Rocksteady did not do their homework as they used Lane but referred to him as an agent from The Order of St. Dumas, whom he was not. As the game was very popular it has caused much confusion with fans who did not realize that there are two different Azrael’s and Lane is not the one who became Batman during the popular Knightfall story arc.