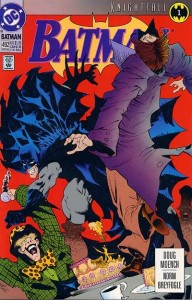 Batman
Knightfall Part 1
Issue No. 492 – March 1993
Crossed Eyes and Dotty Teas
Following the massive Arkham breakout, the Mad Hatter is the first to make a move. He sends Film Freak to find out who sprung them from confinement and then invites Batman to a tea party. The thugs at the tea party are easily defeated, and Film Freak is killed by Bane. 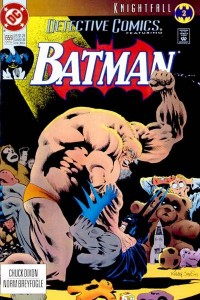 Detective Comics
Knightfall Part 2
Issue No. 659 – May 1993
Puppets
The Ventriloquist and Amygdala team up to find Scarface. Batman find them at a toy store break-in while Robin follows a falcon that leads him to one of Bane’s henchman, Bird. Bane does not allow Robin to take Bird as he retreats. The story ends with the duo hearing that Zsasz has taken hostages at an all girls boarding school. 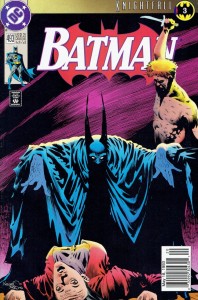 Batman
Knightfall Part 3
Issue 493 – May 1993
Redslash
Already feeling exhausted from capturing the escaped Arkham inmates, Batman and Robin enter the boarding school where Zsasz is holding 15 girls hostage and has killed two police officers. Bane and his crew watch the story unfold via televised coverage as Batman is assisted by officer Montoya. Bird reports to Bane that Batman is appearing to look physically exhausted. 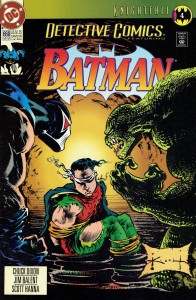 Detective Comics
Knightfall Part 4
Issue 660 – May 1993
Crocodile Tears
Still trailing Bird, Robin is captured by Bane and questioned when Killer Croc intervenes to  battle Bane. Batman is discovered by  Detective Bullock unconscious, unable to come to Robins aid. The boy wonder is caught between the two as they do battle. 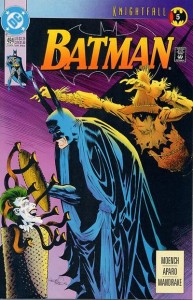 Batman
Knightfall Part 5
Issue 494 – June 1993
Night Terors
Narrowly escaping the sewer brawl between Bane and Killer Croc, Robin returns to the Batcave. Cornelius Stirk teams up with the Joker to go after the Mayor. When Stirk fails the Joker teams up with the Scarecrow to attack Mayor Krol. 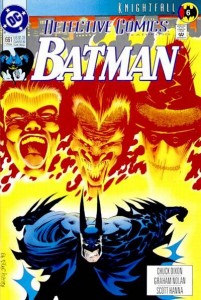 Detective Comics
Knightfall Part 6
Issue 661 – June 1993
City On Fire
Firefly returns and sets Gotham ablaze while Batman sends Robin after him as he continues his battle against the escaped Arkham inmates and captures Cavalier. Meanwhile the Joker and Scarecrow terrorize the Mayor.

Batman
Knightfall Part 7
Issue No. 495 – June 1993
Strange Deadfellows
Exhausted, Batman fails to capture Firefly. Bruce Wayne attends a Wayne Foundation Charity dinner with Dr. Shondra Kinsolving which is commandeered by Poison Ivy. Bane watches from outside and immediately knows that Bruce Wayne is Batman. Elsewhere, the Joker and Scarecrow continue to torture Mayor Krol and lure 20 police into a fun house, detonating it and killing them. 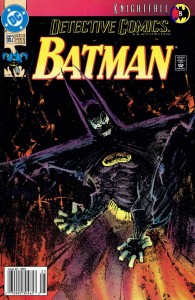 Detective Comics
Knightfall Part 8
Issue No 662 – June 1993
Burning Questions
The Riddler hijacks a TV show but is quickly taken down by Robin, the police, and the bomb squad! Huntress gets the drop on the Riddler’s crew and Batman finally catches Firefly. 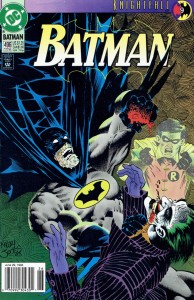 Batman
Knightfall Part 9
Issue No 496 – July 1993
Die Laughing
With Mayor Krol in a state of shock thanks to the Scarecrows fear toxin, the Joker and Scarecrow devise a plan to lure Batman to the Gotham City River tunnels. They then call Commissioner Gordon and ask to send the National Guard, however Batman is on their trail and bests the Joker, but not before being gassed by his fear toxin. The fright sends him mad and he seeks revenge on The Joker for the death of Jason Todd, the second Robin. Joker and Scarecrow narrowly escape, leaving Batman and Mayor Krol to deal with the flooding tunnels. 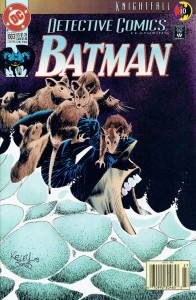 Detective Comics
Knightfall Part 10
Issue No 663 – July 1993
No Rest For The Wicked
The longest night in Batman’s life continues as he and Mayor Krol are swept through the flooded tunnels of Gotham City as Batman gets him to safety. Only afterwards is Batman ambushed by Bane’s men, Trogg, Bird, and Zombie. Meanwhile the final showdown is being put into play as Bane take out Alfred at Wayne Manor and awaits the Batman. 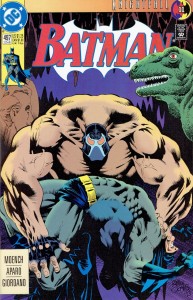 Batman
Knightfall Part 11
Issue No 497 – July 1993
The Broken Bat
Batman returns to Wayne Manor to find Bane waiting for him, revealing he knows that Bruce Wayne and the Batman are the same person. When Batman refuses to submit to Bane he is beaten harshly, first upstairs in the house, and then below in the cave where Bane takes Batman over his knee and breaks his back, leaving him broken on the floor.