Jean Paul Valley makes his official return to the DC Universe as Azrael in the New 52 series
Batman & Robin Eternal. See below for the issues he appears in. Additionally the entire series
was collected in two separate trade volumes. 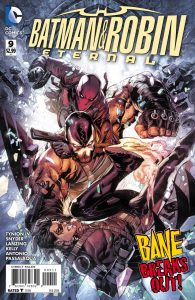 Issue No 9 – February 2016
The Last to Die
Red Hood and Red Robin ditch Red Robin’s plane and chute down to Santa Prisca where they run into Bane. After a brief battle, they strike a deal to take down the Order of St Dumas and their angel who has been striking many down with Bane having his island back. What the trio find is that the Order have built their church atop the Pena Duro prison. Once inside they are caught with the Order’s angel of death, Azrael. We see flashbacks to years prior where Bruce seeks out ‘Mother’ who knows his identity as Batman, and that he seeks a better Robin. 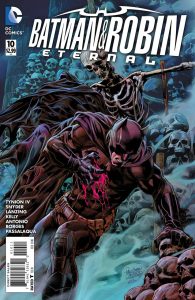 Issue No 10 – February 2016
He Whom God Helps
Red Hood, Bane and Red Robin take on Azrael. Bane is show the light, as is Red Robin, but not before he and Red Hood hack the system of the Order to find records that show the man under the guise of Azrael was man made by Mother for the order. Azrael uses his tricks on Red Robin and shakes him up, leaving the two Robin’s barely a chance to get out with their lives.
Flashbacks of Bruce’s meet-ups with Mother for a new Robin, and an old quarrel with Dick from his time as a Robin. 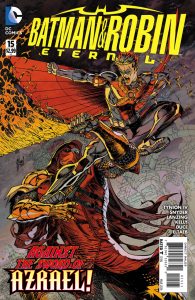 Issue No 15 – March 2016
The Deception of St. Dumas
Azrael’s faith is starting to waiver as he meditates and ask for forgiveness at his sanctum in Gnosis. Red Robin comes to the city with an unconscious Red Hood as his gift, asking to join the order. Azrael brings him to meet the current St. Dumas who wants him to become the new Azrael. In doing this Azrael must fight Red Robin to keep his place but is taken down by an electromagnetic pulse and a concrete solution. Meanwhile Jason is caught and has to face his own mental nightmare, reliving his death against the Joker. 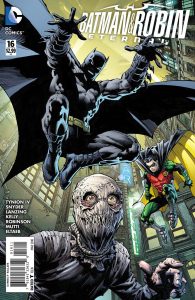 Issue No 16 – March 2016
The Dying Joke
Held captive, Azrael and Red Robin learn the truth about how Jean Paul Valley was shaped into the instrument that becomes Azrael. With this knowledge, and anger, he is able to break free and fight back choosing to be his own truth. Through this Tim must try to break through the trauma programming of ICTHYS that Jason is going through reliving his death at the hands of the Joker in his mind. Once free, the trio team up with the info they need, and a plane, and flee the secret land while Azrael destroys it to go on his own journey. 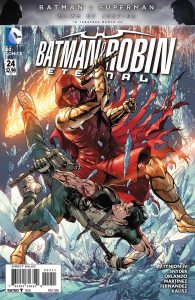 Issue No 24 – May 2016
All Out
The Batfamily and company have their hands full as Mother has released her children all around the world to attack. With Cassandra captive, she has Harper right where she wants her with the promise of giving her the life she could have had if Batman let her if she kills Cassandra. Azrael goes to the Arctic Circle and Meets Agent 37, Dick Grayson, who is also there to take down Mother. 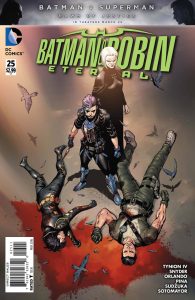 Issue No 25 – May 2016
Orphans
The batfamily presses on against the children of the world under the control of Mother’s ICTHYS. With Scarecrowe’s new toxin completed, they administer it around the world through the doors to knock the children out of Mother’s hold. Dick is tries to talk sense into Azrael that he can find a better way for himself outside of Mother’s rule. 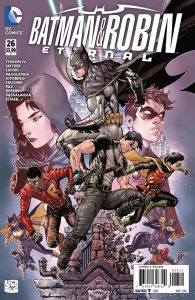 Issue No 26 – May 2016
New World
The batfamily and all allies take down Mother’s infrastructure base finding that it was built atop an active volcano just in case Mother ever had to erase her tracks. Azrael takes out the main satellite communications from the base to all world coms. It’s the end of the line for Mother as she is killed by her right hand man, David, Orphan.
Harper decides to put the costume away and carve her own niche, Cassandra renames herself Orphan and joins in the mission with Batman.