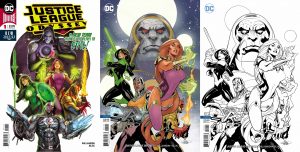 Issue No 1 – September 2018
Ghost Sector – Part 1
Operating outside of the Justice League, Cyborg and Starfire go on a mission to into the Ghost Sector following a mysterious voice that has called them. Along for the ride is Azrael who also heard this voice calling him to the stars. The team takes in Green Lantern Jessica Cruz when she falls into a radiation gap that Starfire saves her from, pulling her into this unknown mission. The team comes to find that the voice calling them actually belongs to Darkseid as he was calling forward ‘The Goddess, The Machine, and The Angel,’ the ‘New Gods.’ 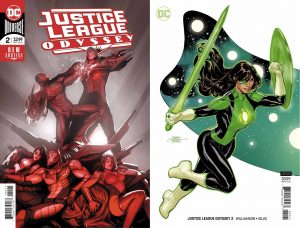 Issue No 2 – October 2018
Ghost Sector – Part 2
The heroes face Darkseid in a battle where he tries to inform them of destinies they are unaware of as ‘the New Gods.’ Darkseid leads the team to a place that appears to be a shrine surrounded y death. A priest reveals to Koriand’r how his people came to this fate before passing along his language to her and dying. The team starts to believe that Darkseid was right and there are different worlds now freed from the Ghost Sector that worship each of them as gods. 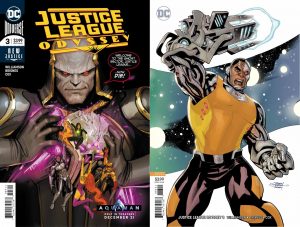 Issue No 3 – November 2019
Ghost Sector – Part 3
Leaving the planet that Koriand’r was worshipped, the team finds them selves on a planet covered in snow. Azrael and Jessica Cruz explore for parts to fix Brainiac’s Skull Ship while Cyborg and a mysterious alien medic tend to the illness plaguing Koriand’r. Once cured they help their friends embattled with this planet’s race while the mysterious ‘Rapture,’ a character dressed in Azrael’s non bat armor, observes. 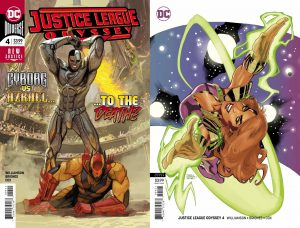 Issue No 4 – January 2018
Ghost Sector – Part 4
Now on the machine world, Cyborg meets the race that worships him as one of the New Gods, however he must first prove that he is not an imposter by facing Azrael in combat. Rapture shows himself to Starfire and Jessica Cruz, pledging his allegiance to Azrael while the planet’s race empart that they are are a people who model themselves after Cyborg with body modification and worship with an in progress working Mother Box. 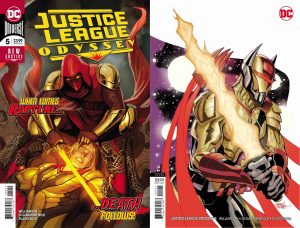 Issue No 5 – January 2019
Ghost Sector – Part 5
While the team battles the machine army, Darkseid cuts a deal with Starfire’s sister Blackfire in an exchange for the Otherbox he has hidden on Tamaran he will never return. Meanwhile Cyborg plugs into his followers Mother Box to find out the secrets of the Ghost Sector, the reasons why it was hidden, and the effects of it being released from his chambers. Rapture reveals that it was he who killed the followers of Starfire. Now with bitterness that Azrael is not the God he thought him to be, he and his legion of Azrael inspired garb wearing disciples are ready to wage a war to kill the ‘Old Gods.’ 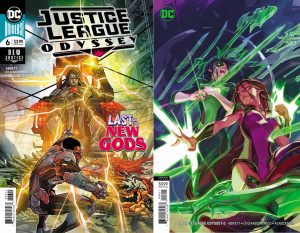 Issue No 6 – February 2019
Ghost Sector – Things Fall Apart
In an attempt to get the next piece for the Other Box, Darkseid battles fail safes set in motion by Brainiac to stop him. Greatly weakened though, Darkseid succeeds. Meanwhile on Tamaran, the team finds the planet in ruins and faces the Queen of the planet, Darkfire who plans to take out at least one of the members thinking it will stop Darkseid’s plan to use the components and the Other Box to create a new Apokilips.