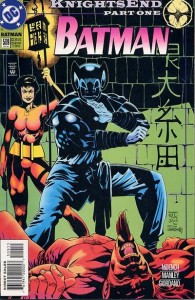 Batman
KnightsEnd – Part 1
Issue No 509 – July 1994
Spirit of the Bat
In order to get back into fighting shake, Bruce Wayne contacts Lady Shiva to train him. After two weeks of training, she gives him a bat mask to wear. The only problem is that this is the same mask she wore when she killed the world’s greatest martial artists and his followers are looking for that person, unknowing that it was actually Lady Shiva. These attacks Bruce does not kill, so Shiva finishes them for him. Meanwhile, Robin is keeping tabs on Jean Paul as his sanity starts to slip. Jean Paul discovers a gang of gun runners has a medallion of the Order of St. Dumas; which happens to have belonged formerly to Carlton LeHah, the man who killed the previous Azrael, Jean Paul’s father Ludovac! 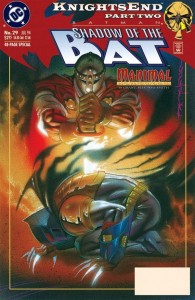 Batman: Shadow of the Bat
KnightsEnd – Part 2
Issue No 29 – July 1994
Manimal Proving Ground
Still being tested by Lady Shiva, Bruce is ambushed by ninja’s. Now asking for Nighting’s help, Bruce briefs Robin and Nightwing on a bit of Jean Paul’s Azrael background after Robin tells how the medallion of the Order of St Dumas seemed to trigger something in Jean Paul. Still wearing Lady Shiva’s Tengu bat mask, he is again assaulted by ninja’s who think he is Shiva.
Jean Paul starts having hallucinations of his father dressed in his original Azrael garb after seeing the medallion. In a quest to find Carlton LeHah, he sets up a trade with an arms dealer as a trap to find out where LeHah is. 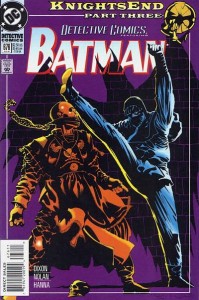 Detective Comics
KnightsEnd – Part 3
Issue No 676 – July 1994
Too Many Ninjas
As Bruce continues through lady Shiva’s tests, Robin takes Nightwing dow to the batcave where he is introduced to Harold. From here they quickly set up surveillance equipment to monitor Jean Paul’s moves while in the cave. When Jean Paul returns from harassing arms dealers on the whereabouts of LeHah, Nightwing and Robin witness Jean Paul hallucinating and come to the conclusion that he is losing his mind. 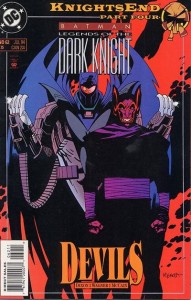 Batman: Legends of the Dark Knight
KnightsEnd – Part 4
Issue No 62 -July 1994
Devils
While Batman is on his quest for the mysterious arms dealer, Lady Shiva’ continues to test Bruce and corrupt him to her level as her final test appears to have Bruce actually kill one of the ninja assassins, viewed by both Knightwing and Robin! 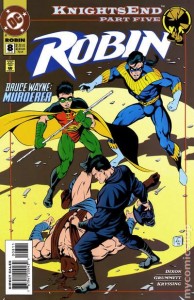 Robin
KnightsEnd – Part 5
Issue No 8 – July 1994
Death’s Door
Knightwing and Robin are horrified to witness Bruce murder the ninja assassin. Lady Shiva is satisfied now that Bruce has broke his rule and leaves. After this the ninja assassin awakes from consciousness Bruce has decided he is ready to reclaim the mantle of the bat from Jean Paul is continuing down the depths of insanity.

Catwoman
KnightsEnd – Part 6
Issue No 12 – July 1994
Fire In The Sky
Bruce has donned his Batsuit again and is ready to take on Jean Paul with the help of Knightwing and Robin. Jean Paul saves Catwoman from her captor Selkirk and is interrupted by the batfamily. Things get explosive on the top of the penthouse. 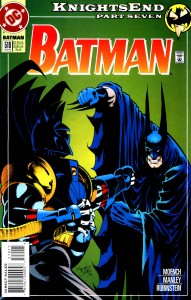 Batman
KnightsEnd – Part 7
Issue No 510 – August 1994
Return of the Bat
Things get hectic atop Selkirk’s penthouse as Batman and Jean Paul battle while Knightwing and Robin get caught in the crossfire between Catwoman and Selkirk who is attempting to escape via helicopter. Jean Paul tries to stop the helicopter from getting away by using his gloves grapnel but finds himself, and Bruce hanging above the city for dear life. 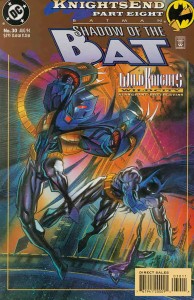 Batman: Shadow of the Bat
KnightsEnd – Part 8
Issue No 30 – August 1994
Wild City
Selkirk’s helicopter ends up crashing into the Gotham bridge which is now a battle ground for the two Batmen while Catwoman is still trying to get the enabler from  him. Jean Paul falls into the river while Bruce tries to get everyone in the area to safety before the helicopter explodes, however doesn’t anticipate Jean Paul booby trapping the Batmobile which explodes, leaving Jean Paul to emerge from the water as the one true Batman. 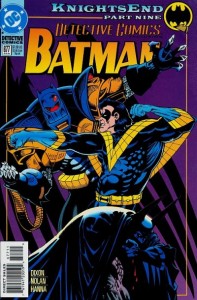 Detective Comics
KnightsEnd – Part 9
Issue No 677 – August 1994
Flesh and Steel
Believing Bruce to be dead, Knightwing attacks Jean Paul as he proclaims himself the one true Batman. Their fight takes them onto a gambling boat where Jean Paul knocks Knightwing unconscious and throws his body at the police before retiring to the Batcave. Meanwhile it appears that Bruce has in fact survived the explosion of the Batmobile and is headed to the Wayne Manor to confront Jean Paul. 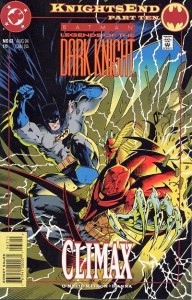 Batman: Legends of the Dark Knight
KnightsEnd – Part 10
Issue No 63 – August 1994
Climax
Jean Paul comes to find Bruce waiting for him at Wayne Manor to reason with him, asking him to step down as Batman. Jean Paul tells Bruce his time has come and gone as he was defeated by Bane and that he should stick to his playboy life. They fight through the mansion before Bruce slips into the cave through the entrance he fell through as a boy, knowing that Jean Paul would have the normal entrance trapped. Bruce taunts him by echoing his voice throughout the cave until he gets him to come through the small entrance, knowing Jean Paul would have to take off his armor. Eventually he is left to his mask, blinded by the sun and proclaims that Bruce is the true Batman. Forgiven, Bruce bids Jean Paul farewell.