Arkham City: The Order of the World 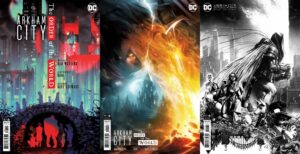 The Joker’s attack on Arkham Asylum left the long-standing Gotham establishment in ruin, most of the patients killed or missing, and only a handful of surviving staff—a few nurses, a gravely injured security guard, and one doctor. In the chaos of the assault, it is believed that several of the asylum’s patients escaped and scurried off into the dark nooks and crannies of Gotham City. Now, these Arkhamites walk among us, and it’s up to the Asylum’s one remaining doctor, Jocasta Joy, to round up her former patients.

Meet these Arkhamites: a woman with no face, a pyggy in search of perfection, a man who feels nothing and burns everything, a woman who must devour life to save herself, a man unfit for the waking world who looks instead for Wonderland, a body with more than one soul, a being unbound from time who lives in the present and the past, a boy who seeks the comfort of vermin, and the twisted man who sees them all for who they are. And witness the avenging angel who stalks them. 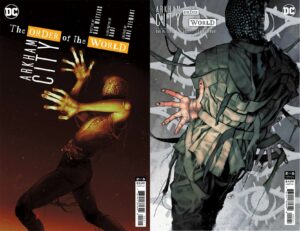 Arkham City: The Order of the World
Issue No. 1 – October 2021
Chapter 2
Dr. Jacosta Joy, Arkham’s last living psychiatrist, continues her descent into the Ten-Eyed Man’s world of delusion. But are his claims of ghosts and ritual purely figments of his imagination, or is there a method to his madness?
Meanwhile, Dr. Double X, a man with the ability to project his soul outside of his own body, has been taken prisoner by a very friendly couple who have discovered that his powers of astral projection can be used on others…and they are addictive. But when Azrael appears in this den of sin, will anyone be safe from his cleansing fire? 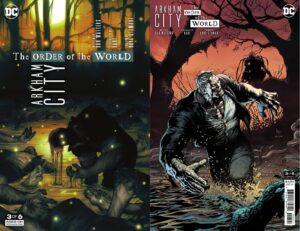 Arkham City: The Order of the World
Issue No. 1 – December 2021
Chapter 3
Solomon Grundy has lived many lives over a great many years. Now, located by Ten-Eyed Man’s strange, but nonetheless effective, methods, he leads Dr. Joy and her many-eyed friend on a tour of the hidden history of Gotham City and the madness at its core. 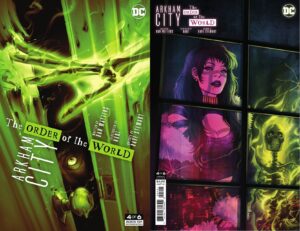 Arkham City: The Order of the World
Issue No. 1 – January 2021
Chapter 4
Dr. Joy is now face to face with the ghost of Amadeus Arkham-the ghost that she had assured all her patients did not exist. Now faced with overwhelming evidence that the Ten-Eyed Man’s “delusions” were anything but, she has found herself questioning everything. Meanwhile, Dr. Phosphorus and Nocturna attempt to live a “normal” life in Gotham, but the good doctor’s radioactive body may be having unforeseen side effects on their unsuspecting neighbors. 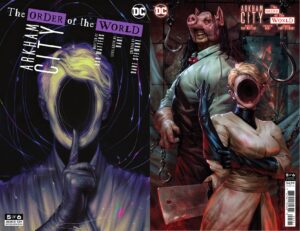 Arkham City: The Order of the World
Issue No. 1 – February 2021
Chapter 5
Like layers of skin peeled back by madness, Dr. Joy finally comes face to face with the absurd, gaping maw of the one true order of the world. With only the fires of Azrael and Detective Stone’s hatred lighting the way, what chance do our poor Arkhamites have at survival as they descend into that which lies beneath all things? 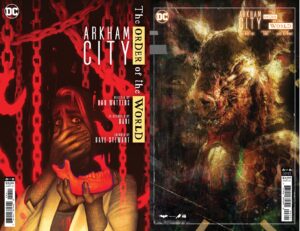 Arkham City: The Order of the World
Issue No. 1 – March 2022
Chapter 6
Dr. Joy has reunited with her missing patients. Now all the survivors of Arkham Asylum’s destruction are together again under one very, very nice and normal roof. But they are not alone in this strange reflection of their old home. For there is a specter with them, one of flame, flesh, and righteous fury—the angel Azrael, and he is very, very angry.