The Convergence story line stars heroes from the ‘Zero Hour’ arc under the banner of the
‘Batman: Shadow of the Bat’ title, each with a variant cover.

Batman: Shadow of the Bat
Issue No. 1 – June 2015
The Dark Side of the Street
With the people of Metropolis trapped under a dome, Bruce Wayne decides to go under cover in hopes to work for the crime boss Tobias Whale. Little does he know that Jean Paul had the same idea and is currently working as Whale’s hired muscle under the assumed name, ‘Johnny Valli.’ As a sort of initiation, ‘Valli’ must give Bruce a brutal beating before joining up.
Bruce and Valli then pay Councilman Hall a visit with Bruce under the orders to murder Hall. Days later the duo are in their batsuits working to hijack Whale’s plans. After knocking Whale unconscious the two batman come to odds in their differing ways of achieving their goals. Bruce then feels a shift in time and reality. 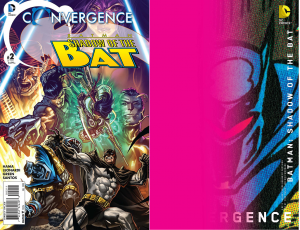 Batman: Shadow of the Bat
Issue No 2 – July 2015
Home is the Sailor
The Wetworks team is on a mission as the city’s champions and are on the hunt for Batman and Azrael. If the duo beat Wetworks however, the inhabitants of the aircrat carrier will be killed.
In the end Azrael strikes up a deal for Batman and Wetworks to team-up in an effort to break down the dome and unite with the heroes on the outside.
Azrael has other plans though and decides to stay with the people of the aircraft city to be their defender.