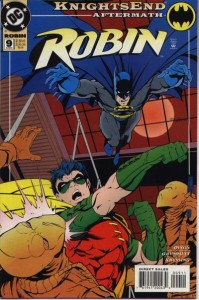 Robin
KnightsEnd – Aftermath
Issue No 9 – August 1994
The Triumph
With Jean Paul now good, Robin returns to the Batcave to find that Bruce is about to announce some changes. Robin does not have time to hear this though and returns home to see his father, Ariana, and they buy a new family car now that Tim can drive. Later, Batman and Robin foil a bank robbery and the police see that everything is seemingly back to normal. 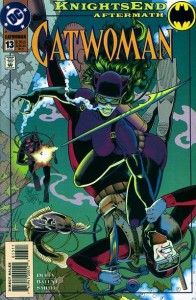 Catwoman
KnightsEnd – Aftermath
Issue No 13  – August 1994
Catfish
Reflecting on the events that led to the enabler being lost into the Gotham River, Catwoman decides to go for an expedition to find the missing unit. After going against Selkirk’s men, she is able to use the unit on her friend. 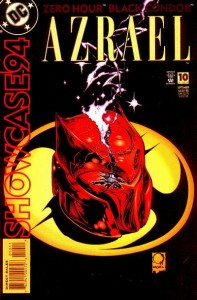 Azrael
KnightsEnd – Aftermath
Issue No 10 – August 1994
Showcase ’94
Now in a state of shock and disarray, Jean Paul reflects on his rise and fall as Batman as he lives amongst the homeless of Gotham City. Practically mute, he saves a paraplegic from being beaten before aimlessly walking alone.