Knightfall – Who Rules The Night 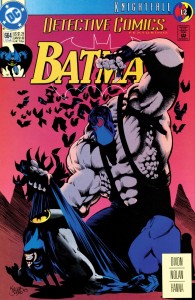 Detective Comics
Knightfall Part 12
Issue No 664 – July 1993
Who Rules The Night
To prove supremacy, Bane takes Batman’s unconscious body into the heart of Gotham and throws him from a roof into the town square for all to see. Disguised as medics, Alfred, Tim and Jean Paul arrive at the scene in an ambulance to take Batman back to the cave to stabilize him. Robin calls in a favor from Commissioner Gordon for medication to aid in Bruce’s condition. Meanwhile upon hearing the news about Batman Joker sees no need to work with Scarecrow anymore and turns on him. 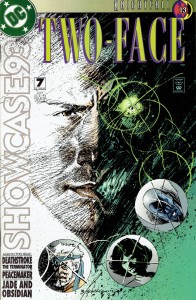 Showcase ’93
Knightfall Part 13
Issue No 7 – July 1993
Face 2 Face Part 1 – Double Cross
As Alfred and Robin look after Bruce, Robin recounts an event a few weeks prior where he felt just as helpless when Two-Face returned to Gotham. While investigating, Batman is set up and a bridge is blown, sending the Batmobile into the river. 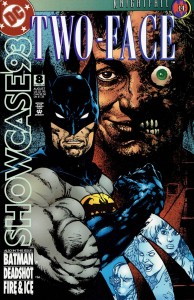 Showcase ’93
Knightfall Part 14
Issue No 8 – August 1993
Face 2 Face Part 2 – Bad Judgement
An exhausted Batman is captured by Two-Face as his body is fished out of the river. Batman is brought to the original Gotham City Municipal Courthouse where the trial that scarred him, turning him into Two-Face occurred. Robin is able to figure out where Batman is taken and crashes the party, enabling Batman to gain the upperhand and initialy saves Two-Face from falling from the building after a bad decision made by Robin. Meanwhile Batman begins to become conscious. 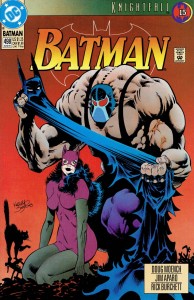 Batman
Knightfall Part 15
Issue 498 – August 1993
Knights In Darkness
With Batman out of commission, Bane begins to attack and absorb gangs in Gotham as well as capture Catwoman and want her to pay tribute to him.  and Tim create a mock car wreck and ask Dr. Shondra Kinsolving to be Bruce’s personal Doctor in aiding in his recovery. Bruce asks Tim to go to Jean Paul and ask him to become Batman with the explicit instructions not to go after Bane. The duo meet Comissioner Gordon letting him know that the Batman may be injured but is not out of the game just yet and will make Bane pay. 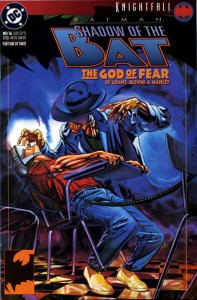 Shadow Of The Bat
Knightfall (Interlude)
Issue No 16 – September 1993
The God of Fear – Part 1
Note: Though not a numbered issue of the Knightsaga, this issue is considered a part of it due to being a mission with Jean Paul as Batman prior to batsuit modifications. Scarecrow uses his fear toxin to get a group of Gotham University students and staff. Meanwhile Anarky escapes believing that Batman is the cause of the city’s problems and must be stopped. 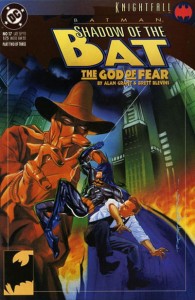 Shadow Of The Bat
Knightfall (Interlude)
Issue No 17 – September 1993
The God of Fear – Part 2
Discovering that one of the students is the son of the first man that he ever killed, Scarecrow uses him as a special part of his plan. At 10 at night, the Scarecrow has the students release his fear toxin throughout the city and claims himself the ‘God of Fear.’ In discovering Scarecrow’s plans, Anarky devises a plan to ry and take down both Scarecrow and Batman at once. 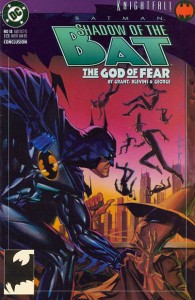 Shadow Of The Bat
Knightfall (Interlude)
Issue No 17 – September 1993
The God of Fear – Part 3
With both Batman and Anarky after him, Scarecrow gives the people of Gotham City 2 hours to declare him the ‘God of Fear.’ Being caught on a rooftop, Scarecrow throws the student over the building as bait; Anarky saves him while Batman goes after Scarecrow who is able to overcome his fear toxin. He ten lets Anarky know that next time they meet he will kill him for standing in his way. 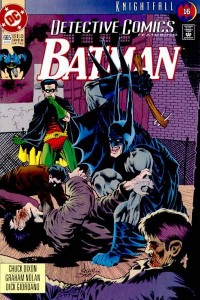 Detective Comics
Knightfall Part 16
Issue No 498 – August 1993
Lightning Changes
With the city in chaos, Robin and Jean Paul as Batman go into the city to start breaking up street crimes and make the presence of Batman known. Jean Paul begins to go a bit too far with his brand of justice and is reminded that Batman does not go the way of brutality. Robin sticks by Jean Paul to keep an eye on him deciding against telling Bruce. Batman shakes down ‘Tough Tony’ Bressi to get a lead on Bane. Meanwhile Bruce pays Dr. Kinsolving a visit next door at Jack Drake’s home where he witnesses her being kidnapped. In trying to stop it, Bruce is further injured. 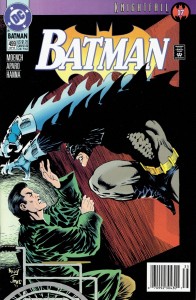 Batman
Knightfall – Part 17
Issue 499 – September 1993
The Venom Connection
Bruce and Alfred ready for a trip to Santa Prisca to rescue the kidnapped Dr. Kinsolving and Jack Drake. Bruce tells Jean Paul to keep up the good work while he is gone. While in flight, Bruce and Alfred discover that Selina Kyle has stowed away on the Wayne jet. After taking down some of Bane’s men, Jean Paul returns to the cave and designs new gauntlets as an addition to the costume to become tougher. 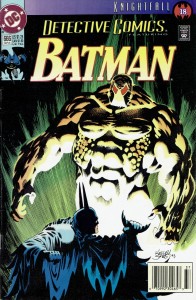 Detective Comics
Knightfall – Part 18
Issue No 666 – September 1993
The Devil You Know
With Bane’s men in custody, Batman devises a plan to find where Bane is hiding out. Batman breaks out Bane’s main henchman – Zombie, Trogg and Bird, leading them to believe that Bane helped them escape. He follows them to the hideout to encounter Bane, not realizing Bane is ready for him. 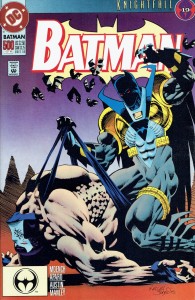 Batman
Knightfall – Part 19
Issue No 500 – October 1993
Dark Angel
Note: This issue was released with two covers, the newstand version (Shown to the left), and a foil die-cut variant, seen in black and white below.
Showing supremacy over ‘the imposter,’ Bane dangles the new Batman over a building in the same square where he threw Bruce. Batman is able to overcome serious injury from the fall but blames the suit for his failed encounter. Allowing ‘The System’ to take over, Jean Paul designs a new batsuit that he feels will be better suited for him over the classic batsuit. Meanwhile Nightwing meets with Robin to discover Bruce gone and Jean Paul as the new Batman, wondering why he was not asked to stand in.
In the second part of the story, Jean Paul is now clad in his new batsuit and ready to take down Bane, publicly. As the police watch, Mayor Krol intervenes and asks the police to stand down and let Batman take care of Bane. The battle ensues throughout Gotham until Jean Paul discovers Bane’s weakness is his dependency on Venom. Once he shuts that off, he unleashes his new suits full arsenal on him, leaving Bane begging Batman to take his life as he declares him the real Batman. Robin also congratulates Jean Paul, letting him know he has earned the right to be Batman now before heading off into the night. 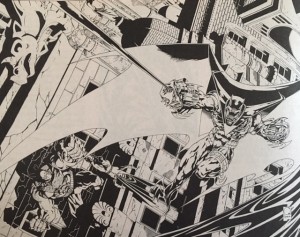